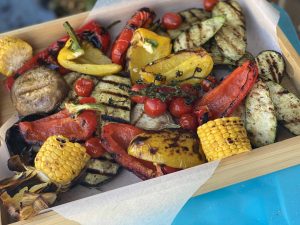 Summer sings of barbeques and this week we’re throwing veggies on the grill.

We’ve kept it simples and kissed them with garlic infused olive oil and dried oregano.

Here’s what’s in our mixed grill!

Toss veggies with oil and oregano and season with salt and pepper.

The corn will take the longest to cook so place that on the grill first for a couple of minutes with the hood down.

Place other veggies on the grill turning every minute or so until charred and cooked to your liking.

Remove from the BBQ and scatter over some more dried olive oil.